The Lord's day and the Sabbath

Rev 1:10 I was in the Spirit on the Lord's day, and heard behind me a great voice, as of a trumpet,

This article defines the Lord’s day from a Biblical perspective.

The phrase "the Lord's day" is only mentioned one time in the Bible:

Rev 1:10 I was in the Spirit on the Lord's day, and heard behind me a great voice, as of a trumpet,

Many people throughout Christianity believe that the Lord's day is Sunday. This is a doctrine of man. There is not one verse in the Bible where God identifies Himself with any day other than the Sabbath. Over and over again in the Old and the New testaments, God associates Himself with the Sabbath. Jesus, Himself claimed that He was Lord of the Sabbath several times. From the very beginning, during creation, God blessed and sanctified one day, the seventh day which is the Sabbath day.

These verses all show which day the Lord associates Himself with:

Luk 4:16 ... as his custom was, he went into the synagogue on the sabbath day, and stood up for to read.

That verse tells us that Jesus made it a custom to come into the synagogue on the Sabbath day which again illustrates which day is His day.

Many believe that sunday worship replaced the Sabbath at the death and resurrection of Christ. This is not true.

Act 13:43 Now when the congregation was broken up, many of the Jews and religious proselytes followed Paul and Barnabas: who, speaking to them, persuaded them to continue in the grace of God. Act 13:44 And the next sabbath day came almost the whole city together to hear the word of God.

Those verses show the Jews and the Gentiles worshiping on the Sabbath after the resurrection of Christ Jesus. The Bible tells us that Jesus should be our example. We should do as Christ did.

1Pe 2:21 For even hereunto were ye called: because Christ also suffered for us, leaving us an example, that ye should follow his steps:

If Jesus had claimed another day, would he not have told us what that day was?

Heb 4:8 For if Jesus had given them rest, then would he not afterward have spoken of another day.

The idea that God changed the day that He holds as holy is a contradiction of scripture. The Bible tells us that God does not change.

Mal 3:6 For I am the LORD, I change not; therefore ye sons of Jacob are not consumed. Mal 3:7 Even from the days of your fathers ye are gone away from mine ordinances, and have not kept them. Return unto me, and I will return unto you, saith the LORD of hosts. ...

Notice that those verses are speaking directly about people not paying attention to the ordinances of God. The ordinances of God are His ten commandments that He wrote in stone with His own finger. The 4th commandment tells us to remember the Sabbath day to keep it holy. If the Lord's day replaced the Sabbath day, then would He not have given us a new set of commandments which proclaimed the keeping of the Lord's day rather than the Sabbath? This would have again been saying that God was changing His ordinances. We have already seen that God does not change. The Lord's day didn't replace the Sabbath. The Lord's day is the Sabbath. There is one way to be sure that God has not changed the day that He associates Himself with. That is to take a look into the future. We can go to a time when this Earth has passed away and Jesus reigns supreme in the new Heaven and the new Earth. The prophet Isaiah gave us a glimpse of what life would be like on the new Earth.

Those scriptures tell us specifically which days ALL people will come together to worship. The Bible also tells us that there have been false teachers in the past and there are false teachers now.

2Pe 2:1 But there were false prophets also among the people, even as there shall be false teachers among you, who privily shall bring in damnable heresies, even denying the Lord that bought them, and bring upon themselves swift destruction. 2Pe 2:2 And many shall follow their pernicious ways; by reason of whom the way of truth shall be evil spoken of.

2177 The Sunday celebration of the Lord's Day and his Eucharist is at the heart of the Church's life. "Sunday is the day on which the paschal mystery is celebrated in light of the apostolic tradition and is to be observed as the foremost holy day of obligation in the universal Church

2173 The Gospel reports many incidents when Jesus was accused of violating the sabbath law. But Jesus never fails to respect the holiness of this day.98 He gives this law its authentic and authoritative interpretation: "The sabbath was made for man, not man for the sabbath."99 With compassion, Christ declares the sabbath for doing good rather than harm, for saving life rather than killing.100 The sabbath is the day of the Lord of mercies and a day to honor God.101 "The Son of Man is lord even of the sabbath."102

However, they also tell us that they gather on "the day of the sun".

We all gather on the day of the sun, for it is the first day [after the Jewish sabbath, but also the first day] when God, separating matter from darkness, made the world; and on this same day Jesus Christ our Savior rose from the dead. 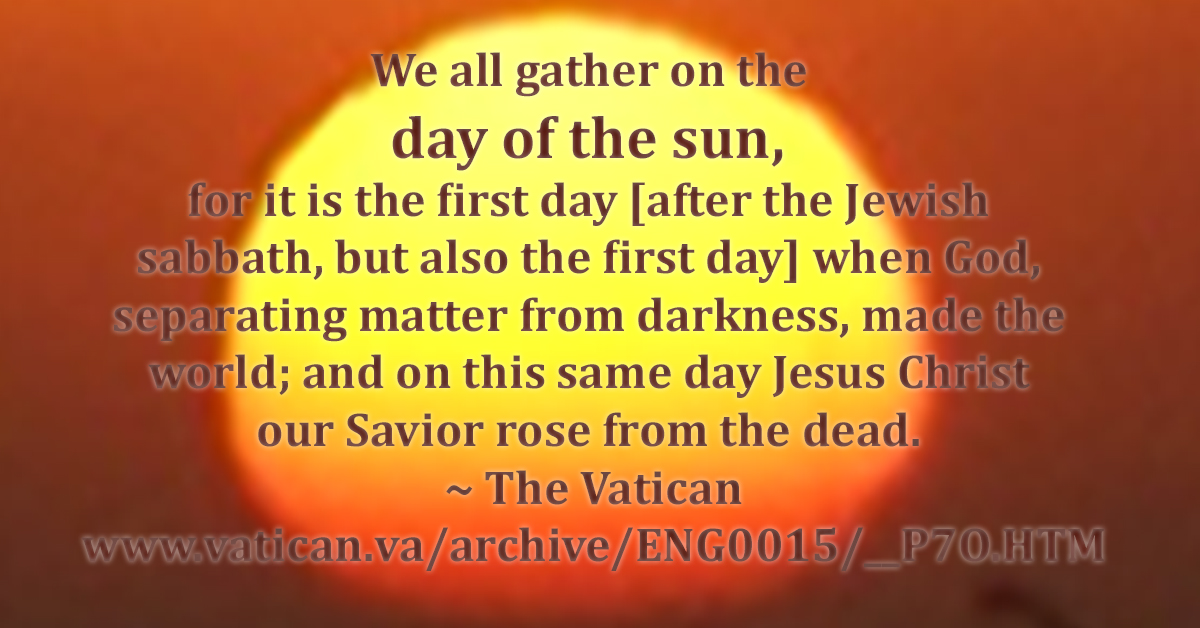