My Kidney Transplant - Real life stories from readers of Godmadeus.com

Pro 17:22 A merry heart doeth good like a medicine: but a broken spirit drieth the bones.

I have known that I have Polycystic Kidney Disease since 1986. My father and oldest brother also had the disease. I was in the tenth grade and I had to quit school so I could drive my dad to the hospital three days a week. I enrolled in a correspondence course and I would do my school work while I was waiting for my dad to get his dialysis. Back then they had to have dialysis for eight hours a day. I watched him struggle and suffer not knowing that I was to meet the same fate. I also have wonderful memories of the times we spent together on those days at the hospital, and the long drive to and from. Every time I see a Dunkin Donut shop I remember my dad. Every morning on the way to the hospital we stopped. Daddy had coffee and a donut and I had hot chocolate and a donut. I also watched my oldest brother battle the disease.

I had begun to believe that maybe I would be one of the lucky ones that never have to face kidney failure. In June 2011 I went for my check up but this time the news was not so good. He came in and told me it was time for him to refer me to the transplant team. I was not expecting to hear that. I knew that I was not feeling well and was extremely tired all the time, but I had brushed it off thinking I was working too hard and getting older. I went home and told my husband, Robert the news. I am sure it was a shock to him as well. Robert does not like to talk about his feelings. His response was "what is the next step?" I decided not to tell anyone until I met with the transplant team. Two weeks later I received a call from the transplant team and they had set us up for a training session. We spent the morning watching a video and the transplant nurse went over everything that would happen and the testing I would have to go through. I had to fill out a contract agreeing to follow all the terms laid out in the document. I also had to fill out a power of attorney and a directive to the physician in case something went wrong, and I was not able to make my own decisions. That was a sobering moment and brought home the fact that this could be life or death. The afternoon started with the lab taking around 21 vials of blood, and then I had an EKG, chest X-rays, Sonogram on my heart and a Doppler test on the veins in my neck. They gave me a huge packet and told me to read through everything and to start making plans for the transplant.

Over the next several months I had an Ultrasound on the abdomen, Stress test on my heart, and numerous other tests. By the end of December 2011 I had finished my testing. There was not one inch of my body that was not tested. Then I had to see two different Urologists, Kidney doctor, Cardiologist, Gynecologist, Oncologist, Neurologist, Dentist, and Eye doctor. Then we started the waiting game to see if I was a candidate for the transplant. While I was waiting to see if they were going to accept me, the transplant coordinator asked if I had a possible living donor. I told her I did not know because I had not told anyone yet. She was shocked and told me that I needed to start letting everyone know what was happening. I called my brothers and sisters and every one of them offered to give me a kidney. I did not want to accept the offer because I knew it could put their lives at risk. I finally gave in but I felt like I was being selfish. They all wanted to be tested first and I told them they would have to figure that out among themselves. My younger brother, Jeff tested first but he did not pass the blood pressure test. He was very upset that he could not be the one to donate. He made the coordinator use three different blood pressure machines and he also wore a blood pressure monitor as did my other siblings. My older brother, Bob tested next and he also could not pass the blood pressure test. He also was sad that he could not be the one. Bob was later diagnosed with cancer. I can't help but wonder if they had just done the next test on Bob if they would have found his cancer sooner. They say the third time's a charm. My older sister, Mary was next in line. She started her testing in March 2012. After months of testing we found out she was a match. They told us that we were more like twins than sisters. She was so excited and she could not understand why I was not as excited as she was. The whole time my family was testing, I was secretly hoping they would not be a match. I did not want to put their lives in danger. Don't get me wrong, I am extremely grateful for her sacrifice and the gift of life she gave me. We will always share a special bond.

I received the transplant July 24, 2012. Mary and I did extremely well through the surgery. The transplant doctor told me that the transplanted kidney started working before they even finished the surgery. The morning after surgery I kept looking at my fingernails and wondered who had painted my nails. I guess I was still drunk from the anesthesia. After a few minutes I realized it was because the new kidney was working so well. Before the transplant, I had lost the normal pigment under my fingernails due to my illness. Mary stayed in Houston two weeks after the surgery and I spent almost six weeks there. We began to take walks as soon as I was out of the hospital, and those times were special for me. I was so happy that Mary could go home so soon, but it sure was hard when she drove off and I had to stay. I was so happy when my time came to make the long trip home. I have made many trips to Lubbock for lab work and doctors appointments and will continue to do so. The first three months are extremely critical. The doctors have adjusted my medications several times and I have had issues with my blood counts, but I think we are finally on track.

I went back to work on a full time basis on September 16, 2012. I am very fortunate to have wonderful people to work with. My co-workers planned a benefit dinner to raise funds to help with my medical expenses. They did not tell me until they put the benefit information in the paper. The benefit dinner was a huge success. I also have a wonderful boss that lets me take off when I need to. The transplant team at UMC and Methodist are wonderful and very kind people. There have been many prayers sent up for me and I know that makes a big difference. My family has supported me through the good and bad times. Robert has been my rock through this process. We live in a small town and we had never been to Houston. It was stressful for Robert wondering if we could find our way to and from the hospital. We used our GPS and he did a great job driving in the heavy traffic. He has taken very good care of me and I couldn't have done this without him. The transplant team told me many times, what a wonderful and generous family I was blessed with, and I agree with them!! I was thinking the other night about how ironic it is that the day I found the lump in my breast was the day my oldest brother, Jimmie lost his life with kidney failure. The cancer in my breast was a fast growing cancer and while I was in Houston getting the transplant, Bob was diagnosed with cancer. I want to end this with a big thank you to my husband, family, and my friends that have done so much for me. I love you all more than you will ever know. Please keep the payers going for Mary, Bob, and me. Thank you for taking the time to read my story.

Mary's story can be read here. 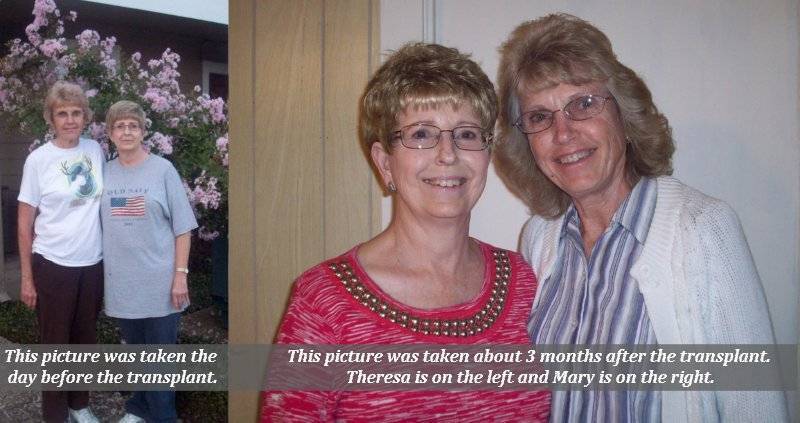