Do Christians Worship the Sun or the Son? | Godmadeus.com

1Ki 18:21 And Elijah came unto all the people, and said, How long halt ye between two opinions? if the LORD be God, follow him: but if Baal, then follow him. And the people answered him not a word.

This mosaic demonstrates the pagan Roman culture of the day was attempting to add Christ in with the collection of pagan idols they worshiped. The Chronography of 354 shows they also connected Christ and Sol invicti with the date of December 25th. They were combining the pagan practice of worshiping the sun with the Christian practice of worshiping the Son of God, Christ Jesus. Another name for sun worship is Mithraism. The Encyclopedia Britannica describes Mithra as "the Iranian god of the sun, justice, contract, and war" (Merkelbach). The same Encyclopedia Britannica article also says this pagan deity was referred to as Mithras in the Roman Empire during the 2nd and 3rd centuries. These facts combine to explain this rather strange statement included in the quote from the Catholic Education and Resource Center from chapter two: "Since the 200s, Jesus was honored with the title, 'Sun of Justice'." This is simply the attachment of a Mithraic title to Christ. The attachment of this title can only be viewed as an attempt to associate Christ with paganism by third century Rome.

The fact Rome was combining sun worship with the worship of Christ is well documented and is also commonly understood among those who study the subject. These vastly different theological viewpoints have numerous superficial similarities as described in the following quote.

"The Dies Natalis Invicti was probably first celebrated in Rome by order of the Emperor Aurelian, an ardent worshiper of the Syrian sun-god Baal. With the Sol Invictus was identified the figure of Mithra, that strange eastern god whose cult resembled in so many ways the worship of Jesus, and who was at one time a serious rival of the Christ in the minds of thoughtful men.*

* Mithraism resembled Christianity in its monotheistic tendencies, its sacraments, its comparatively high morality, its doctrine of an Intercessor and Redeemer, and its vivid belief in a future life and judgment to come. Moreover Sunday was its holy-day dedicated to the Sun" (Miles 23).

The specific name of the pagan deity Baal appears 64 times in the King James Bible. This same pagan deity pops up over and over throughout the ages as a snare to the children of God. We should not be surprised to now find a connection to Baal as we search out the origins of Christmas. We are told through the prophet Elijah to choose God or Baal. There has been a tendency from very early on to merge the worship of God with the rituals of Baal worship. In this respect, nothing has changed.

1Ki 18:21 And Elijah came unto all the people, and said, How long halt ye between two opinions? if the LORD be God, follow him: but if Baal, then follow him. And the people answered him not a word.

"[The Roman Empire] which at all times was ready to admit the religious ideas and cults of foreign peoples, under certain conditions, within the circle of its own religious operations" (Roman Religion 820).

According to all sources, the religion of pagan Rome was constantly changing throughout the centuries. Foreign lands were conquered, and their religious rituals were assimilated into Roman culture. Perhaps, it was inevitable Christianity would at some point be added to the mix. The pagans of 4th century Rome would take no offense to Christ being added to their religious operations.

"The conflict is keen at first; the Church authorities fight tooth and nail against these relics of heathenism, these devilish rites; but mankind's instinctive paganism is insuppressible, the practices continue as ritual, though losing much of their meaning, and the church, weary of denouncing, comes to wink at them, while the pagan joy in earthly life begins to colour her own festival" (Miles 26).

True Christianity, on the other hand, would strongly object to the association of the Savior of all mankind with paganism. Mr. Miles describes the development of the Christian feast of the nativity as a keen conflict between the Church authorities and "mankind's instinctive paganism." We continue to see the connection between Christ and December 25th; now we also begin to see why the connection was originally made. It appears to have begun with the most noble of intentions — the attempted conversion of pagans to Christianity.

"The new faith had gained a firm footing among the Persians; and Mithras, the god of light, was worshiped centuries later by many of the Romans, who preferred this religion to the newly introduced Christianity" (Robinson, James Harvey 37).

Sun worship, or Mithraism, had found a firm footing in Europe centuries before the time frame we are examining. This foothold has been continuous from at least the 6th century B.C. and is present even now. The 4th century church in Rome had its work cut out for it in attempting to convert the pagan populace to Christianity. Many Romans simply preferred to worship the sun god their ancestors had always worshiped. Their "god of light" was known by many names such as Mithra, Baal, and Sol invicti. Now, another name was being connected to this pagan sun deity. That name was none other than Christ Jesus. By all appearances, the church in Rome was willing, at the very least, to look the other way as the connection was being made. The intention of converting pagans to Christianity may have been a noble one. However, rather than converting pagans to Christianity, paganism was thoroughly incorporated into Christianity. 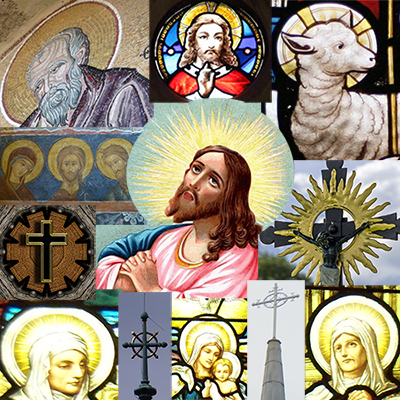 to think we can make a very clear distinction between worship of the sun, and worship of the Son. However, we still commonly find a connection between Sol or Baal and Christianity in much of the so-called "Christian" artwork of today. We routinely see Christ, the Apostles, Prophets, Mary, lambs, and doves portrayed with a sunburst or halo of light surrounding their head. A halo or sunburst is even sometimes included in images of the cross. These halos and sunburst are the same as those used in Mithraism or sun worship. We can find this type of artwork in the buildings of almost all Christian denominations. Throughout the Bible, we are told the people of God polluted the house of God with the abominations of the heathen.

2Ch 36:14 Moreover all the chief of the priests, and the people, transgressed very much after all the abominations of the heathen; and polluted the house of the LORD which he had hallowed in Jerusalem.

History appears to be repeating itself once again. Many, if not most, Christian churches today contain this remnant of sun or Baal worship in their stained glass windows and other artwork. Since at least the middle of the 4th century, there has been a connection between the 25th of December, the birth of the sun god, and the birth of our Savior, Christ. The halos and rays of sun depicted in the stained glass windows and other modern "Christian" artwork stand as a witness to the connection between the relics of the temples of Baal and the Christian church. Do the traditions of Christmas also involve relics of paganism?

What Have We Learned About How Christ Became Connected to the 25th of December?

1. We are able to recognize Sol is the same as Mithra and is also the same pagan deity the Bible refers to as Baal.
2. We have seen the early church fought heavily against the inclusion of pagan celebrations into the church.
3. We have seen the early church relented and allowed the inclusion of rites associated with sun worship into the church. They did this in an attempt to convert pagans to Christianity.
3. We have seen the name of the holiday changed from a pagan name to a Christian name — from Natalis Sol Invicti to Christmas.
3. We have seen there was a merger which took place between worship of the sun and worship of the son of God.
4. We have seen the familiar rays and halos, which had previously been used in the depiction of Sol, begin to be used to depict Christ, and this practice even overflowed onto the depictions of the apostles, prophets, Mary, lambs, and the cross.
5. We have seen this practice of combining the characteristics of Sol with Christianity continues in modern Christian artwork. 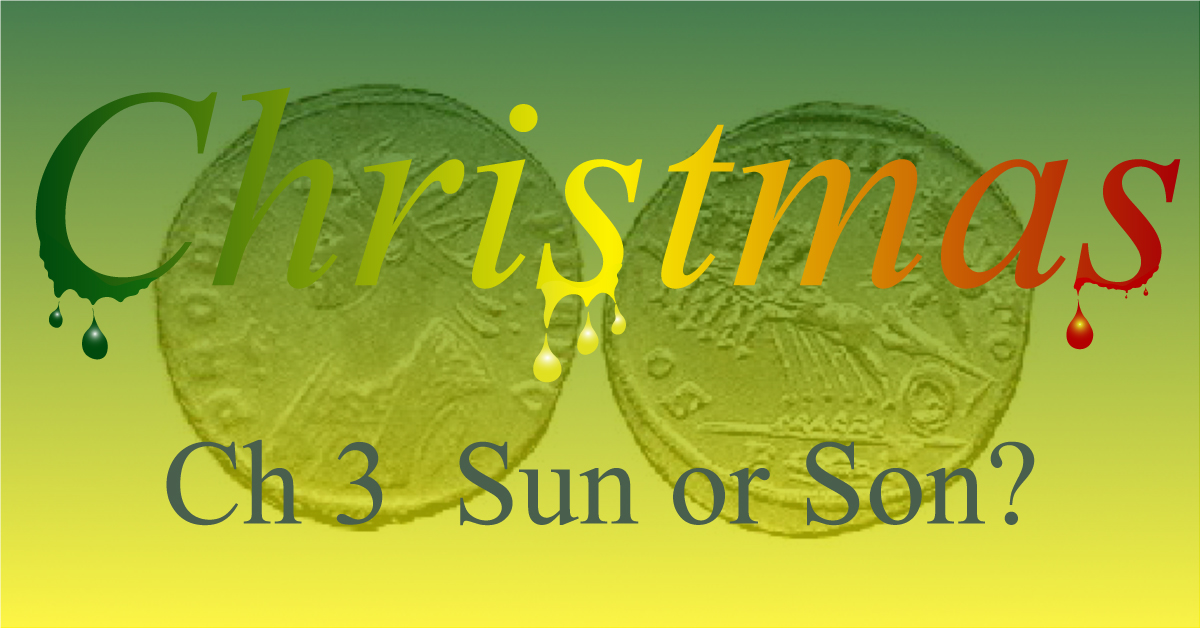