Evolutionary Theory and the Bible

Is accepting evolution compatible with accepting the word of God? In school we are taught that there was a big bang and that everything, including man evolved over millions of years. In church we are taught: "In the beginning God created the heavens and the earth". Which is correct? Can only one be correct, or is there a way to reconcile the two? For thousands of years man has pondered the beginning of everything and for just as long there have been multiple theories as to how everything came to be. Scientific theories emerge and evolve as new information is obtained and yet the Bible remains constant, never wavering, never changing. This apparent conflict between science and the Bible has caused many to outright reject one or the other. Still others try to combine the two into a spiritual/scientific soup that is more palatable to their own spiritual and scientific taste buds. There is still another group which refuses to give it much consideration either way. No matter where we stand on the issue, here are some thoughts worth considering:

The Bible tells us that God created the heaven and the earth.

Gen 1:1 In the beginning God created the heaven and the earth.

Evolutionary theory tells us that there was a big bang, but doesn't tell us where the material for the "big bang" came from.

Evolutionary theorist will correctly point out that the Bible doesn't tell us how God came into existence. It just tells us that God is eternal:

Deu 33:27 The eternal God is thy refuge, and underneath are the everlasting arms: and he shall thrust out the enemy from before thee; and shall say, Destroy them.

The question then becomes, should we believe in:

A: An eternal God of unknown origin
Or
B: A speck of matter smaller than the head of a pin which is of an unknown origin that was capable of containing every molecule from every planet, star and galaxy in the universe?
Or
C: God created the heavens and the earth by way of the speck of material found in evolutionary theory.

If we choose C, then we must somehow reconcile the timing because evolutionary theory tells us that the earth took billions of years to form, but the Bible tells us that it took one day.

Gen 1:5 And God called the light Day, and the darkness he called Night. And the evening and the morning were the first day.

Some will point to verses that show God's time is different than ours. This is certainly true, in Biblical prophecy we are told that a day equals a year. This verse doesn't appear to be prophetic though and there is quite a discrepancy between a day being a year as in prophecy or a day being billions of years as would be required to reconcile evolutionary theory with the Bible. Others will point to:

Again I will point out that a thousand years is not nearly equivalent to billions of years. We must each determine whether a reasonable argument might be made to combine the Bible with Evolutionary theory on this point.

The Bible tells us that each species only produces more of its own species. Each species whether it is plant or animal only brings forth of its own kind. Here are a few of the verses which show this is what the Bible states:

Gen 1:20 And God said, Let the waters bring forth abundantly the moving creature that hath life, and fowl that may fly above the earth in the open firmament of heaven.
Gen 1:21 And God created great whales, and every living creature that moveth, which the waters brought forth abundantly, after their kind, and every winged fowl after his kind: and God saw that it was good.

This point appears to force us to choose to believe in either evolutionary theory or the teachings of the Bible. Is there a way to reconcile the two?

How did the two sexes of plants, animals and humans come into existence?

The Bible tells us that God created male and female.

The Bible teaches that God formed man from the dust of the ground.

Gen 2:7 And the LORD God formed man of the dust of the ground, and breathed into his nostrils the breath of life; and man became a living soul.

Again it appears that one must choose to believe in either evolutionary theory or the Bible. Is there middle ground on this issue?

The Bible teaches us specifically that woman was created from one of man's rib.

Gen 2:22 And the rib, which the LORD God had taken from man, made he a woman, and brought her unto the man.

Evolutionary theory teaches that woman evolved, and again is largely conflicted on how the two sexes formed other than to say that they both evolved.

Again it appears that one must choose to believe in either evolutionary theory or the Bible. There is no scientific proof that one species ever evolved into another species. However, there is evidence to support the Biblical account of how women came into being. The human rib can regenerate if it is removed. Here is a quote from The National Center for Biotechnology Information website that supports this fact. This quote is discussing a procedure which involves removing a portion of a rib or ribs and using the rib pieces to make repairs to the person's skull.

"Cranioplasty using a synthetic material is less than ideal, especially if there is a history of infection at the defect site. Split-rib cranioplasty is a practical approach even in patients with a positive history of infection at or around the defect. We briefly review the historical background of split-rib cranioplasty and report our experience with this procedure in 12 patients. Forty-two pieces of rib, with an average length of 13 cm. were used for reconstruction. We had only 1 complication-a pneumothorax following removal of the rib graft. The follow-up period ranged from three to thirty-six months. All patients had complete regeneration of the donor rib and solid protection of the brain."
Source:http://www.ncbi.nlm.nih.gov/pubmed/7332200 11/19/2012

Note:13 cm is equal to just over 5 inches. The phrase that I have highlighted shows that in all cases, the rib regrew after being removed. The quote also tells us that the portion of rib removed and used to reconstruct the cranium also grew to fill in the missing part of the skull. This is a case where having a knowledge of the Bible, can help to further scientific knowledge. There are many examples where Biblical principles have led the way to great discoveries in the scientific world. The Bible and Science are not mutually exclusive. In fact, if we followed the Bible every time we would be well ahead of where we are now. When scientific theory conflicts with the word of God we need to recognize that one is perfect and the other is not.

This makes the earth younger than the sun.

Gen 1:1 In the beginning God created the heaven and the earth.
Gen 1:2 And the earth was without form, and void; and darkness was upon the face of the deep. And the Spirit of God moved upon the face of the waters.
Gen 1:3 And God said, Let there be light: and there was light.
Gen 1:4 And God saw the light, that it was good: and God divided the light from the darkness.
Gen 1:5 And God called the light Day, and the darkness he called Night. And the evening and the morning were the first day.

The order of creation and the order of evolution are contradictory on many levels. This is just one of the examples. Again it appears that one must choose to believe in either evolutionary theory or the Bible. Is there middle ground here?

The Bible teaches that everything was created in 6 days.

Evolutionary theory teaches that everything evolved over a period of almost 14 billion years.

The duration of evolution and the duration of creation are off by nearly 14 billion years. Again it appears that one must choose to believe in either evolutionary theory or the Bible. 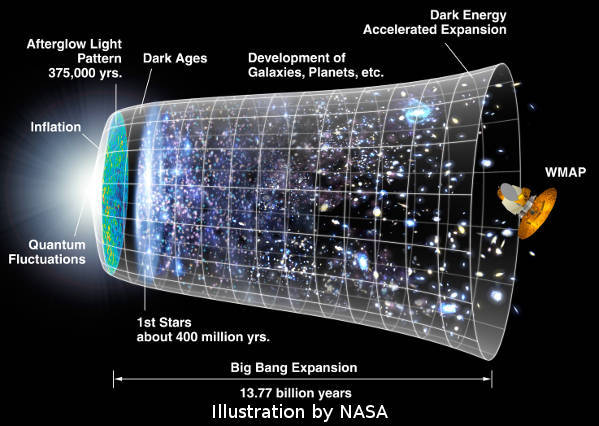 The Bible makes it very clear that the days in Genesis are literal days. For instance the days are defined as the "evening and the morning". One night and one day.

The Bible also makes it clear that the days are not separated by billions of years or even a few years because the plants were created a day before the sun.

Gen 1:11 And God said, Let the earth bring forth grass, the herb yielding seed, and the fruit tree yielding fruit after his kind, whose seed is in itself, upon the earth: and it was so.
Gen 1:12 And the earth brought forth grass, and herb yielding seed after his kind, and the tree yielding fruit, whose seed was in itself, after his kind: and God saw that it was good.
Gen 1:13 And the evening and the morning were the third day.
Gen 1:14 And God said, Let there be lights in the firmament of the heaven to divide the day from the night; and let them be for signs, and for seasons, and for days, and years:

We can observe that plants require the light of the sun to live. If there were even a few years between Genesis 1:13 and Genesis 1:14 the plants would not have survived. Again we must ask ourselves if there is middle ground on this point.

Current evolutionary theory teaches that man began to evolve around 200,000 years ago.

The Bible teaches that all people descend from Noah and his sons and their wives (8 people) roughly 4000 years ago. This date can be obtained by adding up the ages of people mentioned in the Bible and combining those ages with other known events such as births. I will not delve into the specifics of this and that is why I have chosen to put the date of the flood at "roughly 4000 years ago".

The Bible teaches that man was created in the image of God.

If we try to combine evolutionary theory and the Bible, then at what point during the evolutionary process was man in the likeness of God? As a primordial pool of sludge? As an ape?

Evolutionary theory teaches that death has existed since the beginning.

The Bible teaches that death entered into the world because of sin.

Gen 3:22 And the LORD God said, Behold, the man is become as one of us, to know good and evil: and now, lest he put forth his hand, and take also of the tree of life, and eat, and live for ever:
Gen 3:23 Therefore the LORD God sent him forth from the garden of Eden, to till the ground from whence he was taken.
Gen 3:24 So he drove out the man; and he placed at the east of the garden of Eden Cherubims, and a flaming sword which turned every way, to keep the way of the tree of life.

Rom 5:12 Wherefore, as by one man sin entered into the world, and death by sin; and so death passed upon all men, for that all have sinned: